today I’d like to mention a writing device known as the Deus Ex Machina, which happens to be often used in Fantasy fiction.

What is a Deus Ex Machina?

“A Deus Ex Machina is when some new event, character, ability, or object solves a seemingly unsolvable problem in a sudden, unexpected way. The term is Latin for god from the machine and has its origins in ancient Greek theater. It referred to scenes in which a crane (machina) was used to lower actors or statues playing a god (deus) onto the stage to set things right, often near the end of the play.”

There are many in Fantasy fiction, from Aslan saving the day in every book of The Chronicles of Narnia to the dragons’ magic only working in times of need in Eragon. However, J.R.R. Tolkien is the one who used this device extensively in all his stories. In The Hobbit, Bilbo and the dwarves are saved time and again by the miraculous interventions of Gandalf and the Eagles. 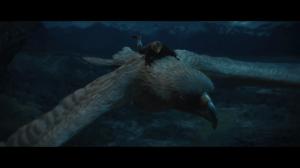 After all, coincidences do happen in real life, and the reader wants the hero to win, doesn’t he? Yes, but the reader is also entitled to a satisfying ending. And a Deus Ex Machina rarely provides it, because the coincidence feels unnatural and lazy. As if the writer couldn’t sort out his own plot, and he resorted to pulling a god out of his hat to save the hero and solve all the plot holes.

So should you include a Deus Ex Machina in your Fantasy novel? Why not. But know what is it and when to use it. Know that it’s a trope readers are acutely aware of and they rarely forgive.

Do you use a Deus Ex Machina in your novel? Does it feel like  you’re taking the easy way out by using it or not? Feel free to leave us a comment below!

When Peter Jackson announced he would be bringing J.R.R. Tolkien’s classic The Hobbit: or There and Back Again to the big screen, the obvious question was how would it compare to his epic Lord of the Rings movie trilogy? Rumours of padding, and taking liberties with the story continued to gain momentum when it was confirmed earlier this year that his adaptation would be told over not two – but three movies. For a book of barely 300 pages that is more children’s story than full blown epic, many wondered how Jackson was going to pull it all together and stay true to the original tale.

Fortunately Jackson has proven he is a masterful film maker with safe hands, and the result is a movie which blends both the light-hearted and almost comical elements of the book, with the darker vein of a wider history (Sauron’s gathering power) foundational to The Lord of the Rings.

The story is based around a group of 13 dwarves, lead by Thorin Oakenshield (Richard Armitage), set on reclaiming their mountain fortress from the ferocious dragon Smaug. The wizard Gandalf, (beautifully revived by Ian McKellan) who is aiding the group insists the unsuspecting (and put out) hobbit Bilbo Baggins (Martin Freeman) complete the party. The Hobbit: An Unexpected Journey sees the unlikely heroes set out on their quest, armed with only a fancy key, an incomplete map, and a grim dwarven determination to put things right.

Suffice to stay with two more movies in the offing the group barely get a glimpse of the Lonely Mountain, but there is plenty more going on to keep the viewer riveted for almost three hours. The scenes are spectacular and varied, ranging from homely Hobbiton, dreamy Rivendell and the vast Goblin (Orc) halls in the Misty Mountains to the rich gold-laden mines and treasure chambers of the Dwarves.

The special effects are amazing and cutting edge. I wasn’t able to see the new 48 frame per second version which has been roundly criticized (so I can’t comment on how that impacted the viewing experience), but the 3D experience was rich and vibrant. The sequence shot with Gollum was sublime. Even better than previous offerings – as the graphics, writing and acting were all right on point. The action scenes, fast paced and multi-dimensional (at one point there was so much going on I struggled to keep up just watching), didn’t disappoint either.

As for the cries of taking liberties with the plot and padding with back story, there is perhaps some truth. Radagast the Brown (wizard) is introduced to the story to tie in the impact of the growing dark power. Azog the Orc, who rated only a mention in the book (as killer of Thorin’s grandfather), is elevated to the villain of the piece and a new storyline is pieced together to tie the movie into a cohesive whole. Stretching the story? Maybe. But Jackson has made an honest effort to stay true to Tolkien’s wider work while still delivering a memorable cinematic experience.

The movie sits well alongside Jackson’s previous film offerings and was a joy to watch. For fans of Tolkien’s larger works, it’s also a good excuse to dig back into the original text and find the small references Jackson mines to flesh out his film.

Review by Raewyn Hewitt: Reader and writer of epic fantasy. Some of her earliest and most precious memories were of being snuggled up in bed as her Nana read her The Hobbit.